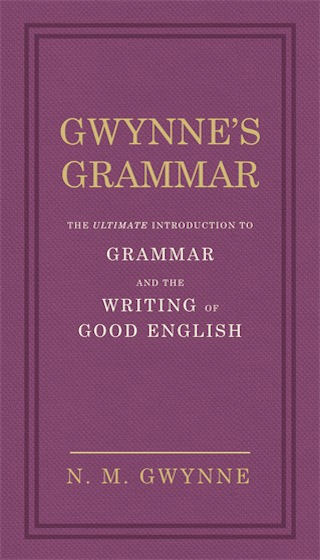 THE ULTIMATE INTRODUCTION TO GRAMMAR AND THE WRITING OF GOOD ENGLISH.

DEFINITIONS, EXPLANATIONS AND ILLUSTRATIONS OF THE PARTS OF SPEECH AND OF THE OTHER MOST IMPORTANT TECHNICAL TERMS OF GRAMMAR.

INCORPORATING ALSO STRUNK’S GUIDE TO STYLE EXPLAINING HOW TO WRITE WELL AND THE MAIN PITFALLS TO AVOID.

If you would like to purchase a copy of Gwynne’s Grammar, click on the image to the right.

Here is some of what the author has to say about this book.

I think I am on the point of making history. I am about to ask a question which, to the best of my knowledge, no author has ever, ever asked about his book before. Are you listening carefully? Is this little book, in perhaps the most fundamental sense, the most important book in print today? And I am actually not even half-joking. I beg for your close and rapt attention while I make a case.

Words are what we think with as well as communicate with. Without words we can feel (tired, hungry, angry and so on), but we cannot think.

But it then follows that, if we are to think correctly and usefully, words need to be used correctly, obviously.

Grammar, therefore, on which even the understanding of vocabulary depends (though of course grammar also depends on vocabulary – they are mutually dependent) is fundamental to everything of any importance that humans get up to.

So yes, the Holy Bible and other books are more important – vastly more important of course — in the information they convey. But grammar is of prior importance to them in that, without it, no other book, however important, can either be written or understood.

If I have made my case so far, the only remaining question is: is there any book in print that does better what this little book sets out to do? If anybody knows of one, please tell us. Tom Hodgkinson (Idler Books) and I are not in it for the money, are we, Tom? We’ll simply consign this book to the scrapheap and Tom will sell the other one instead!

I actually don’t think you will find it easy to find a book that does better what this one does. When Tom invited me to put this book together after months of observing me teaching his children at home over the Internet, and even chose its title, what was obviously needed was a book which not only set out the facts of grammar correctly, and there are plenty of books which do that well, but also included a clear picture of how grammar ought to be taught. And none of the best books of the past seem to deal with this aspect of the subject

And there was a good reason for this absence. Grammar had been taught as the first fundamental of education for the whole of the recorded history of education, dating back 2 1/2 thousand years or so. Century after century, it was taught just as it had always been taught, with refinements here and there. Each teacher taught it as he or she had been taught it, and there was nothing difficult about that. But those days are gone – since the 1960s and shortly after, we are in a time when there is literally no professional teacher left in any schools who himself or herself will have been taught in the traditional, tried-and-tested, common-sense way that it had always been done in the past. Hence, this book genuinely does break new ground, as far as I know – new ground simply because it is ground that never needed to be broken before, but my goodness it needs to be broken now.

How have I done in my claim to have made history?

The little book’s unusually long title already says quite a lot about it that is useful. I can further claim that it is certainly thoroughly practical. Over several years now, I have been teaching many different academic subjects – ranging from handwriting to philosophy — to pupils and students of all ages from two-years-old to over seventy, some of the pupils home-schooled and some in classes just before or after school, in parts of the world ranging from India in one direction, through Europe, to the west coast of the USA in the other direction. Such extraordinarily wide-ranging experience as I have had in a relatively short time would not have been possible until recently, but, thanks to modern technology, I have been doing this teaching while sitting at home, or anywhere else of my choice, but, even so, almost as though in the same classroom as my pupils.

And with every single one of my pupils, young and old, I have had to include grammar in my teaching. I have had to include it even though it is – shockingly and tragically – a subject which is now almost completely ignored in schools, as it has been for about fifty years. It always needs to be tackled in order to make possible the satisfactory teaching of the other subjects.

The book was commissioned and put together, therefore, because the practical need of it was so evident.

The first two editions which were in effect try-out editions. Helped by my having used them as the basis for several lectures that I have given publicly on English grammar in recent months, but otherwise with very little advertising other than by word-of-mouth, they both exhausted their print-runs with encouraging speed. And this new edition is what might be called definitive — a supplemented, refined and, in other respects as well, improved version of its predecessors.

I think I can confidently claim that it is (a) accurate, comprehensive and thorough as far as it goes, (b) helpful how it sets out to teach the subject to readers of all levels from complete beginners onwards, and, not least important in a book for such a purpose, (c) as readable as such a book can reasonably be, without, however being in the least dumbed-down.

But let my gracious readers be the judge of all that. Any suggestions as to how the next edition can be improved yet further will be warmly welcomed. What is beyond doubt is that there is a serious need for a book such as this.